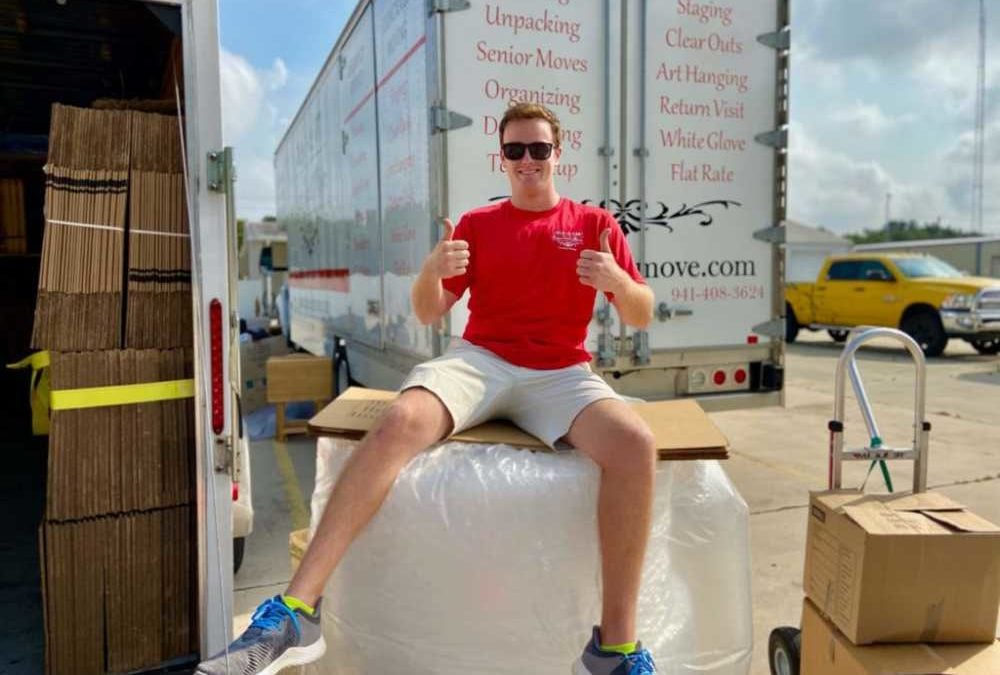 Venice is commonly associated with its beautiful retirement communities, sparkling beaches, and charming people but what about its economic potential?

With a small unemployment rate of 3.3%, which is well below the national average, Venice is already appreciated in political circles for doing an exceptional job in keeping its population in good shape. With the addition of Amazon into this burgeoning economy, the potential of a major economic boom rises.

This is one of the greatest additions to the city without a doubt. But, as good locals ourselves and business owners (we operate a moving company in Venice Florida), we want to take a closer look at what all this entails.

The Details On Amazon’s Move to Venice

Let’s begin by analyzing what the Amazon news is all about and how it impacts Venice.

Amazon has decided to set up an extensive warehouse on commerce drive off of I-75 and Jacaranda Boulevard. This is a warehouse that is going to help provide value to not only Venice but the surrounding areas making it easier for the company to service this part of the Suncoast.

(Local news report on this) 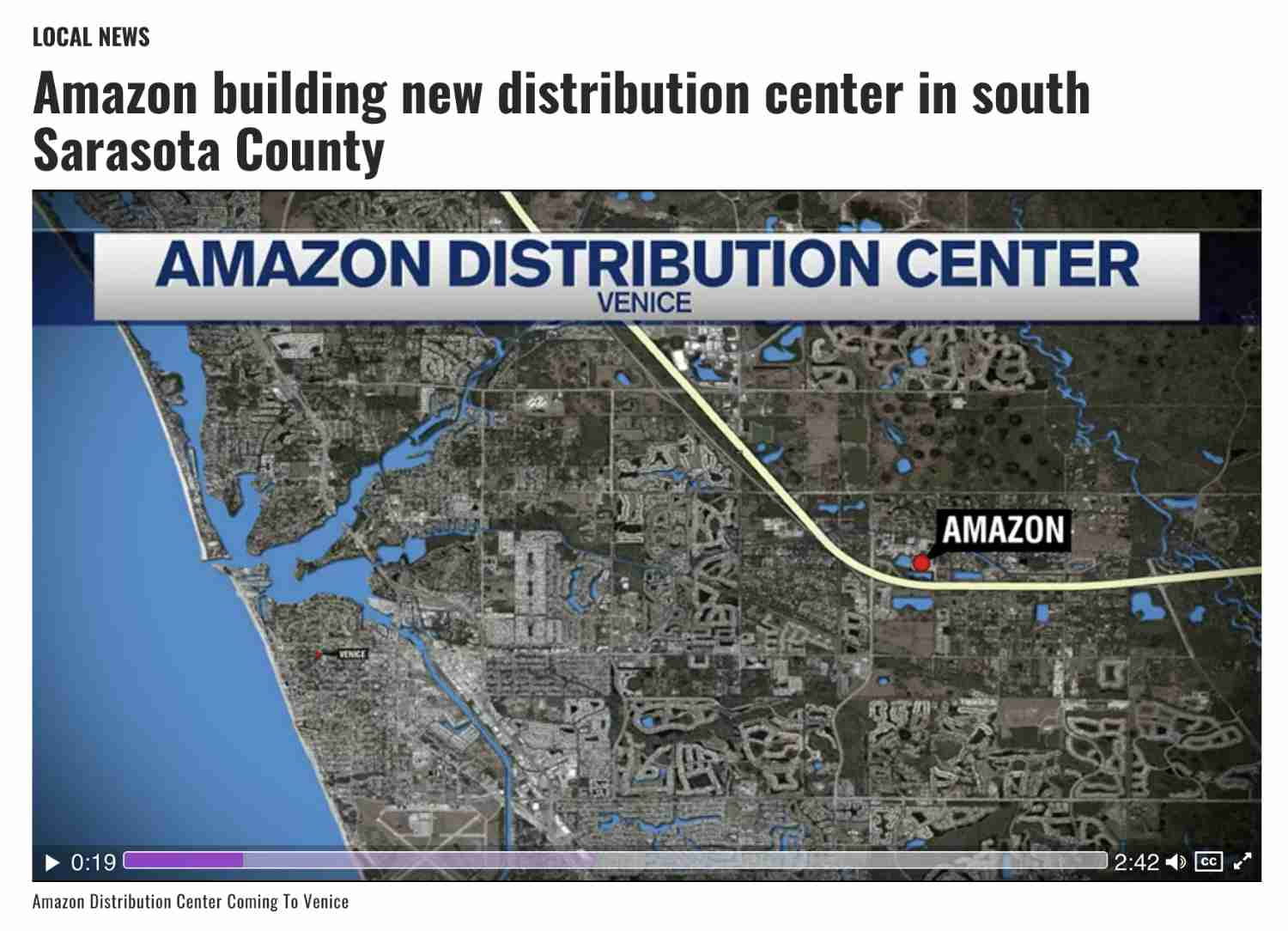 The goal is to erect a 120,000 square-foot facility on this piece of land making it a robust addition to the city and state. While this is not the largest facility Amazon has launched across America, it is a sizable investment and one that is going to help boost the economy according to the local mayor.

The construction is expected to cost $16 million dollars and will be a significant investment into the community right away.

Current Progress and Hirings by Amazon

The starting pay is expected to be 15 dollars an hour at the facility and the hiring will begin as soon as the construction has been completed.

The land has been cleared out along commerce drive off of I-75 and Jacaranda Boulevard with the facility almost ready to go. Amazon is renowned for being quick with its construction and will have the facility up and running in no time at all.

For those seeking a new job and/or want to upgrade their career, this is great news. It is a wonderful opportunity to join with a leading brand that is only going to gain stature in the coming years.

Benefits of Amazon Coming To Venice

With Amazon coming to Venice, Florida it might be assumed the only change will involve faster delivery dates on orders made through the online e-commerce giant.

Yes, the orders are going to come quickly but that is just icing on the cake for locals!

Instead, the real value in this warehouse set up has to do with the local job creation. Right away there will be an influx of high-paying jobs that are going to make it easier to stay employed regardless of what the economy is doing.

Amazon continues to do well in different economic conditions because of its brand and general stature in the retail market. It is among the best at what it does and that is why it continues to increase the number of jobs under its banner.

The same applies to those residing in Venice!

The high-paying jobs are going to make it easier to live and lead a healthy life.

The local economy is already touted as being among the best in Florida. Venice has continued to grow in recent years and is appreciated for doing everything in its power to remain a high-powered community that has great healthcare and a long list of tourist hotspots.

Along with this, the economy is also a perfect place for a company such as Amazon to set up shop.

With a strong community of professionals and a well-run economy, this is going to help boost the local economical standards to new heights.

It is expected for this to have a profound impact on how the economy does at different times. This includes when the national economy takes a hit. This safety net is always great and that is why having a facility of this nature is a game-changer.

3. Increase in National and International Interest

This is an underrated advantage and one that is going to be of great interest among locals.

Venice is already renowned as being a great spot to retire and spend time with your loved ones. It is safe, has a great selection of restaurants, and there is always something to do around town. However, these are elements that are only known to locals and those who love to travel.

By having an Amazon facility in Venice, it is going to help boost economic activity to new heights on interest alone. This includes both national and international interest.

When Amazon comes to a specific city, they bring along with them awareness. This is great for the city and is going to help across all industries!

This includes the moving industry as it continues to service the demand that is on offer. For those who are thinking about moving to the region, this will become noticeable right away. The finest moving companies work in this region and offer high-value services for those wanting to make the process as seamless as possible.

4. Sets Up an Anchor Tenant

An “anchor tenant” is one that is going to offer a consistent stream of income to the city. This is something all cities crave and locals get to reap the rewards through improved healthcare, roads, and everything in between.

It changes the overall outlook of a city when these types of tenants settle in and begin adding value to the community they are a part of.

The same happens with Amazon whenever they set up a facility, which is why it is one of the most respected companies in the retail business. As an online retailer, they have a significant market share not only in Venice but everywhere in the world.

Due to this, they act as an anchor tenant that is a guaranteed check for the city to cash in.

Being a part of this city and living here makes you the biggest gainer. You get to see the real value of these large checks coming into the city. Whether it is through infrastructural changes or new programs, there is something for everyone to enjoy due to the added economic value.

The local mayor stated the increase in retail traffic would be a boon for Venice.

This traffic not only adds value to Amazon but also brings along with it serious economic activity across the board. Having more eyes on the city and knowing it is an Amazon hub is never a bad thing.

While the facility isn’t the largest in the country, it is still a great investment by Amazon.

This makes it a great catalyst for commerce activity in different parts of the city.

Research shows local moving companies will also see a rise in demand due to the Amazon move.

Those moving to the city looking for a career change and/or wanting to tap into Amazon’s potential should be moving into the region during the colder months. This is when the demand is down and it is easier to set up a spot with a trusted local moving company.

Never settle for less as the right full-service moving company can make all the difference in the world. This includes assisting in optimizing the move and making sure everything is handled professionally from day one.

The Amazon move is one that is going to change the outlook for Venice in the coming decades and it is going to offer serious value to locals in the region!